What does Gerald mean?

[ 2 syll. ge-ral(d), ger-a-ld ] The baby boy name Gerald is pronounced in English as JHEHR-ahLD †. Gerald is used predominantly in the English and German languages, and its origin is Old French and Germanic. From Germanic roots, its meaning is spear rule. A two-element name, it is derived from the elements 'ger' meaning spear ; 'wald' to rule. Gerwald (Germanic) is an original form of Gerald. The name was introduced to England by the Normans in the 11th century, but its use subsided by the late 13th century. In Ireland, the name was brought in around the 12th century by Maurice Fitzgerald, Lord of Lanstephan, whose family was greatly influential as the Earls of Kildare. The name was sometimes confused with Gerard, which was a more popular name in the Middle Ages. The name saw a revival in 19th century England, along with other medieval names. It also acquired a somewhat aristocratic flavor.

Gerald is a short form of the name Fitzgerald (English).

The name Geraldine (English, French, and German) is the female version of Gerald.

Gerald is a classic favorite. Today it is still somewhat popular as a baby name for boys, though to a lesser extent than it was in the past. Its usage peaked in 1939 with 0.887% of baby boys being given the name Gerald. Its ranking then was #19. The baby name has since markedly fallen in popularity, and is currently of occasional use. In 2018, its usage was only 0.013% and its ranking #894. Among the group of boy names directly linked to Gerald, Gerardo was the most popular. In 2018, the name was twice as popular as Gerald. Gerald has predominantly been a baby boy name, though in the past century it has also been used for girls. In 1937, baby boys named Gerald outnumbered girls by 187 times.

Baby names that sound like Gerald include Gerrald, Gerrold, Geryld, and Geralde. 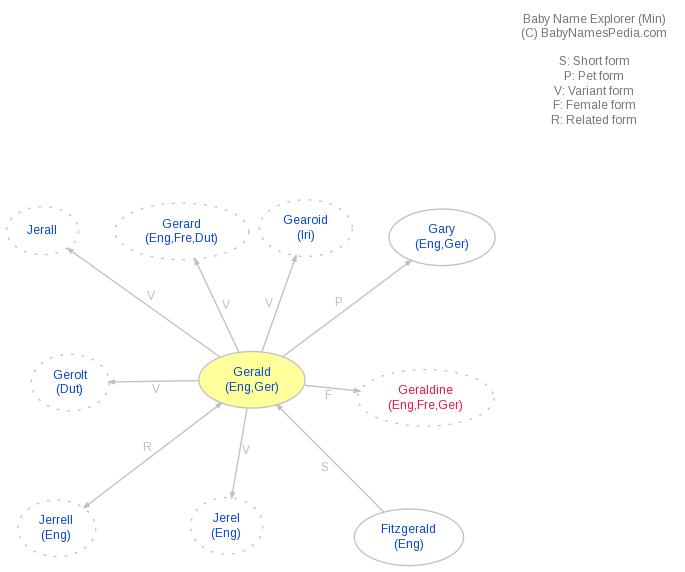