What does Gerda mean?

[ 2 syll. ger-da, ge-rda ] The baby girl name Gerda is pronounced as GERDAH †. Gerda is mainly used in the Latvian, African, Dutch, English, German, and Scandinavian languages. It is of Old Greek, Old Norse, and Germanic origin. Old Norse origin, African, Dutch, English, German, and Scandinavian use: It is derived from the word 'gerd' meaning enclosure. An original form of Gerda is Gerdr (Old Norse). The name is sometimes taken as a feminine form of Gerard in Germany and the Netherlands. The name was borne by Gerd, the goddess of peace and fertility and wife of the god Freyr in Norse mythology. The name was first adopted by English speakers in the 19th century.

In addition, Gerda is a variant form of the English name Georgia in the Latvian language.

Gerda is also a familiar form of the Dutch, English, French, German, and Italian name Gertrude in the German language.

Another variant of Gerda is the Dutch familiar form Gerrie.

Gerda is unusual as a baby girl name. Its usage peaked modestly in 1915 with 0.005% of baby girls being given the name Gerda. It was #949 in rank then. The baby name has fallen in popularity since then, and is today used on an infrequent scale. In 2018, among the family of girl names directly linked to Gerda, Georgia was the most regularly used. 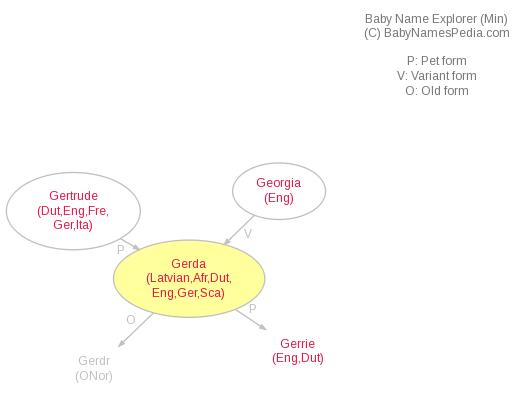