What does Gerry mean?

[ 2 syll. ger-ry, ge-rry ] The baby boy name Gerry is sometimes used as a girl name. Its pronunciation is JHEHR-iy- †. Gerry is used chiefly in the English and German languages, and its origin is Germanic and Old Greek.

Gerry is a diminutive form of the name Gerald (English and German).

Gerry is also a diminutive form of the name Gerard (English, French, and Dutch) in the English and German languages.

Gerry is also a variant of the name Jerome (English and French) in the English language.

Gerry is rare as a baby name for boys. At the modest peak of its usage in 1958, 0.024% of baby boys were given the name Gerry. It ranked at #336 then. The baby name has since substantially declined in popularity, and is today of sporadic use. In 2018, out of the group of boy names directly linked to Gerry, Jerome was the most popular. There were times from 1921 to 1939 when more girls than baby boys were named Gerry, but currently it is more often than not a baby boy name. In 1959, the name Gerry was given to 4 times as many baby boys than girls. 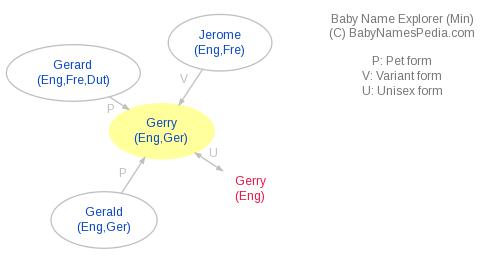