What does Gilbert mean?

[ 2 syll. gil-ber(t), gi-lbe-rt ] The baby boy name Gilbert is pronounced as GIHL-BahRT in English, K-IHL-BahRT in Dutch, or ZHiyL-BEHR in French †. Gilbert is an English, French, and German name of Germanic origin. The name is of the meaning bright pledge. A two-element name, it is derived from the elements 'gisil' meaning pledge, hostage ; 'berht' bright, famous. Gisilbert (Germanic) is an older form of Gilbert. The name is associated with the medieval custom where rival noblemen would send their children to be raised at each other's court, as a pledge to ensure peace and friendship between them; the child would then be known as a 'gisil' (meaning pledge, hostage). The name was introduced by the Normans to England in the 11th century, but it was used on a regular scale only into the 17th century. The name is common among Roman Catholics, who sometimes bestow it in tribute to Saint Gilbert of Sempringham (1083-1190), the only Englishman to found a convent. In Scotland, the name is sometimes taken as an Anglicized form of the Gaelic Gilbride. The name Gilberta (Dutch, English, German, and Italian) is the female equivalent of Gilbert.

Gilbert is a widely used name; it has 34 variants that are used in English and other languages. Variants used in English include Gilbart, Gilberto (used in Italian and Spanish as well), Gilbirt, Gilbrid, Gilburt, Gilbyrt, Gilibert, Gilibirt, Giliburt, Gillbert, Giselberto, Giselbertus, Guilbert, Guilbirt, Guilburt, and Gylbert. Other English variants include the contraction Gil, and the pet forms Bert (used in Dutch and Scandinavian as well), Bertie, Gib, Gibb, Gill (used in Hebrew as well), and Gilly.

Gilbert is uncommon as a baby name for boys. At the modest height of its usage in 1930, 0.187% of baby boys were given the name Gilbert. Its ranking then was #91. The baby name has since markedly declined in popularity, and is now of infrequent use. Within all boy names in its group, Gilbert was nonetheless the most widely used in 2018. 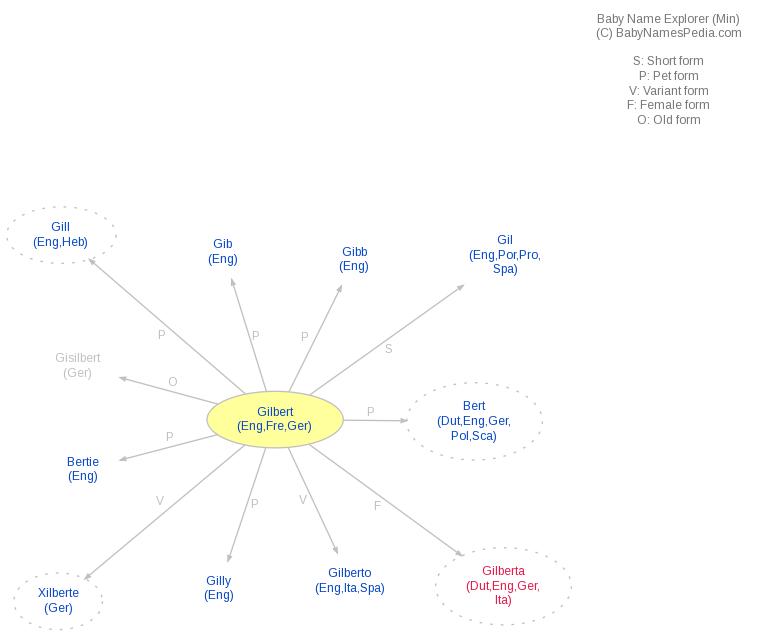