What does Giles mean?

[ 1 syll. gi-les, gil-es ] The baby boy name Giles is pronounced JHihL-Z or ZHHHiy-L †. Giles' origin is Old Greek, and its use, Dutch, English, and German. It is derived from the word aigidion which is of the meaning 'young goat, goat skin'. Older forms of the name include Aegidius (Latin) and Aigidios (Old Greek).

The name was popular among medieval English speakers, particularly in Scotland where it was famous from the 8th-century Saint Giles or Aegidios, the patron saint of Edinburgh and one of the 14 Holy Helpers; he had more than 100 British churches dedicated to him. He was a Greek hermit who got his name from the goatskin he usually wore, and he was also venerated as the patron saint of cripples and beggars. He fled from Athens to France seeking solitude, and in France, the name became Gides or Gildie, and subsequently Gilles. The latter in turn gave rise to the English forms Giles or Gyles. The name later gained rustic associations from the fictional character Giles the farm boy from Robert Bloomfield's poem The Farmer's Boy (1800), and subsequently J.R.R. Tolkien's novella Farmer Giles of Ham (1949). It was also known from the fictional Giles family (1945) created by the Carl Ronald Giles, who was known simply as Giles (1916-1995).

The name Giles is widely used; it has 25 variant forms that are used in English and foreign languages. English variant forms of the name include Gide, Gil (also used in Portuguese, Provençal, and Spanish), Gile, Gileon, Gilette, Gilliss, Gyl, Gyle, Gylles, Gyllis, Gylliss, and Jyles. Other English forms include the spelling variants Gyles and Jiles.

Giles is an uncommon baby boy name. At the modest height of its usage in 1904, 0.011% of baby boys were named Giles. It had a ranking of #595 then. The baby name has fallen from favor since then, and is of only irregular use today. Within all boy names in its family, Giles was nevertheless the most widely used in 2018. 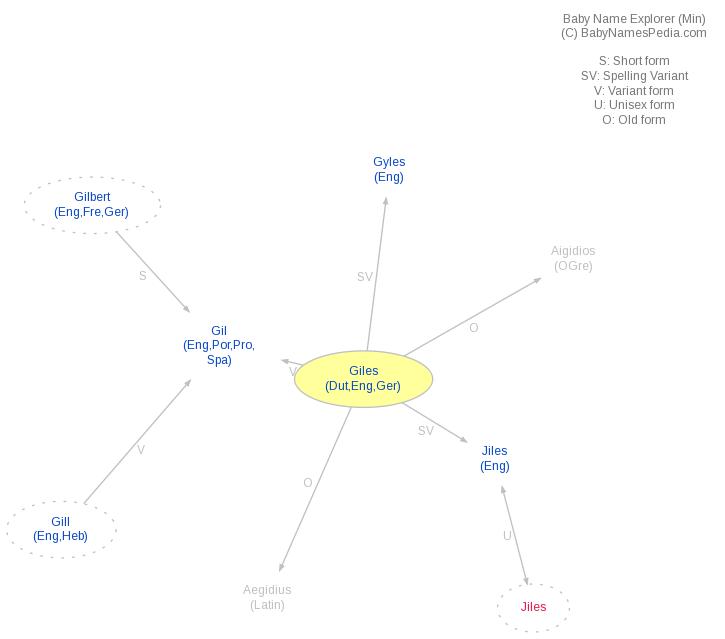