What does Ginny mean?

[ 2 syll. gin-ny, gi-nny ] The baby girl name Ginny is pronounced as JHIHN-iy- †. Ginny is primarily used in English. Its language of origin is Celtic, English, and Latin.

Ginny is an English diminutive of the English, French, and German name Genevieve.

Ginny is also a diminutive of the English name Ginger.

Ginny is also an English diminutive of Virginia.

Ginny is unusual as a baby girl name. Its usage peaked modestly in 1958 with 0.012% of baby girls being named Ginny. It had a ranking of #632 then. The baby name has experienced a substantial fall in frequency since then, and is now used on a very light scale. In 2018, among the family of girl names directly related to Ginny, Genevieve was the most frequently used. 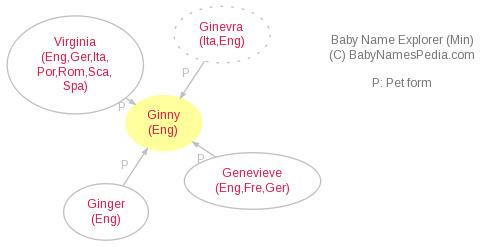