What does Gion mean?

[ syll. gion, gi-on ] The baby boy name Gion is pronounced JH-AHN †. Gion's language of origin is Germanic and it is predominantly used in German. The name is of uncertain origin; it may be associated with the Hebrew Gidon.

Variant forms share the origin and meaning of Gion.

Gion is a seldom used baby name for boys. It is not listed within the top 1000 names. 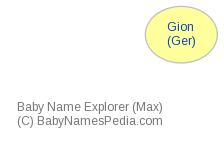