What does Giovanna mean?

[ 3 syll. gio-van-na, gi-ova-nna ] The baby girl name Giovanna is pronounced as JH-ow-VAE-NNaa- †. Giovanna's language of origin is Hebrew. It is predominantly used in the English and Italian languages.

In addition, Giovanna is a derivative (Italian) of the English Jane.

Giovanna is also a derivative (Italian) of the English and Scottish Jean.

What are the Variant Forms of Giovanna?

The name Giovanna is widely used; it has 41 derivatives that are used in English and foreign languages. Derivatives of the name used in English include Geona, Geonna, Geovana, Geovanna, Geovonna, Gian, Gianella, Gianette, Gianina, Gianinna, Giann, Gianne, Giannee, Giannella, Gianni, Giannie, Gianny, Gianoula, Giavana, Giavanna, Giavonna, Ginnetta, Giovana, Giovanea, Giovanee, Giovanetta, Giovaney, Giovani, Giovanie, and Giovanne. The short forms Giana and Gianna (used in Italian as well) are other English variants. The Italian Giovannia is a derivative of Giovanna that is in foreign languages. Specific foreign variants include the short forms Gia (Italian) and Vanna (Italian).

The origin and meaning of the name Giovanna is inherited by all variant forms.

Giovanna is a somewhat popular baby girl name. The name rose in popularity from the 1990s up to the 2000s; prior to that, it was of only infrequent use. Its usage peaked modestly in 2005 with 0.020% of baby girls being given the name Giovanna. It had a ranking of #682 then. The baby name has fallen in popularity since then. In 2018, it ranked at #837 with a usage of 0.017%. Among the family of girl names directly linked to Giovanna, Gianna was the most regularly used. It was more commonly used than Giovanna by 11 times in 2018. 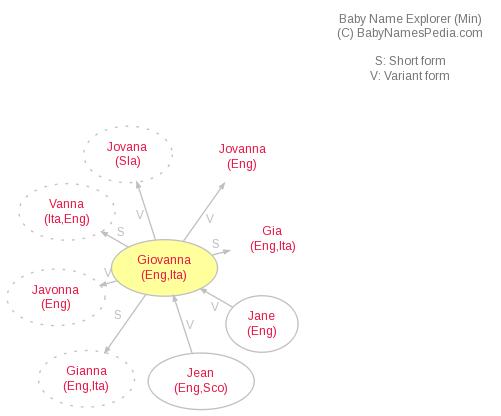