What does Gita mean?

[ 2 syll. gi-ta, git-a ] The baby girl name Gita is pronounced as JHIY-Taa- †. Gita's language of origin is Celtic, Sanskrit, and Old Greek. It is predominantly used in the Czech, German, Indian, Polish, Slavic, and Yiddish languages. Sanskrit origin, German and Indian use: It is derived literally from the word gita meaning 'song'. The name is found in the Sanskrit Hindu scripture Bhagavad Gita, meaning 'song of god'.

In addition, Gita is a short form (Czech) of Brigita (Czech, Latvian, and Slavic) and a variation (Czech) of Bridget (English, Irish, and Scottish).

Gita is also a short form (Czech, Polish, Slavic, and Yiddish) of Margaret (English and Scottish).

Gita is a rare baby girl name. It is not listed in the top 1000. In 2018, among the family of girl names directly linked to Gita, Margaret was the most regularly used. 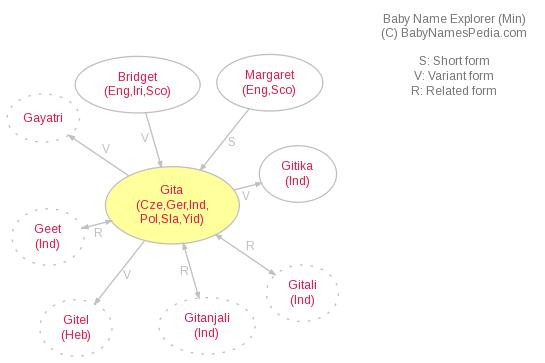