What does Giuseppe mean?

[ 3 syll. giu-sep-pe, gi-use-ppe ] The baby boy name Giuseppe is pronounced as JHuwWSEH-PPeh- †. Giuseppe is used predominantly in the Italian and English languages, and it is derived from Hebrew origins. The name was made known by the Italian general and politican Giuseppe Garibaldi (1807-1882).

In addition, Giuseppe is a variant (English and Italian) of the name Joseph (English, French, and German).

The name Giuseppa (Italian) is the female version of Giuseppe.

Both the origin and meaning of Giuseppe is inherited by all variant forms.

Giuseppe is uncommon as a baby name for boys. At the modest height of its usage in 1975, 0.007% of baby boys were given the name Giuseppe. It ranked at #754 then. The baby name has since experienced a fall in popularity, and is currently of infrequent use. In 2018, within the group of boy names directly linked to Giuseppe, Joseph was the most regularly used. 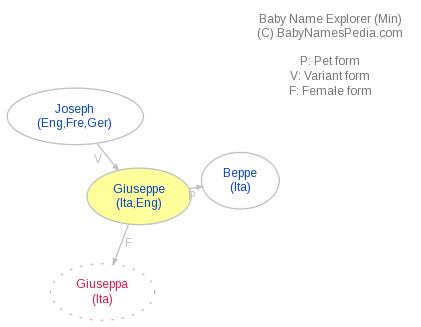