What does Gladys mean?

[ 2 syll. gla-dys, gl-ad-ys ] The baby girl name Gladys is also used as a boy name, though it is far more popular for girls. It is pronounced GLAED-ihS (English) †. Gladys has its origins in the Latin and Old Welsh languages. It is used largely in Welsh and English. Old Welsh origin, English and Welsh use: An old form of the name is Gwladus (Old Welsh). The name is of obscure origin; it could be from gwledig (meaning 'ruler, princess') or gwlad. It has also been used traditionally as a Welsh translation of Claudia.

Gladys is a Welsh form of Claudia.

Gladys has 22 forms that are used in English and foreign languages. English forms of Gladys include Gladdea, Gladdee, Gladdey, Gladdi, Gladdis, Gladdys, Gladia, Gladiz, Gladness, Gladwys, Gladyss, Glayds, Gleda, and Gwyladyss. Other English forms include the shortenings Glad and Glady, the diminutives Gladdie and Gladdy, and the spelling variant Gladis. Forms used in foreign languages include the Hawaiian Gladi, the Welsh Gwladus, and the Welsh Gwladys.

Gladys is rare as a baby girl name. At the peak of its usage in 1901, 1.052% of baby girls were named Gladys. It had a ranking of #11 then. The baby name has substantially dropped in popularity since then, and is of only sporadic use now. In 2018, out of the family of girl names directly related to Gladys, Claudia was the most commonly used. Gladys has mainly been a baby girl name in the last century. There were 163 times more baby girls than boys who were named Gladys in 1914. 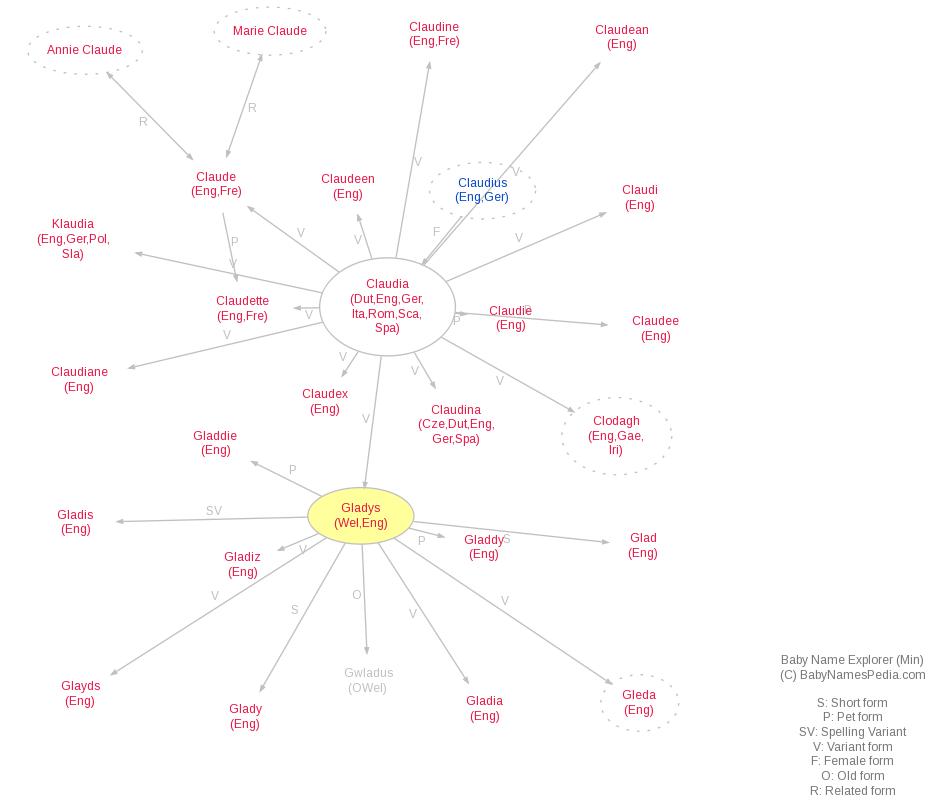