What does Glenn mean?

[ 1 syll. glen(n), gl-e-nn ] The baby boy name Glenn is sometimes used as a girl name. It is pronounced as GLehN †. Glenn is used predominantly in the English, Irish, and Scottish languages, and it is derived from Celtic origins. The name is of the meaning from the valley. The first name could be derived from the surname, which is itself from the Gaelic element 'gleann', or else the first name could be directly from the Gaelic element. The first name is used in Scotland as well as other English speaking countries. The name Glenna (English) is the female version of Glenn.

The name Glyn (English, Irish, and Welsh) and the name Glynn (Welsh) are variants of Glenn.

Glen (English, Irish, and Scottish variant spelling) is another form of Glenn.

Glenn is an unusual baby name for boys. Its usage peaked in 1962 with 0.350% of baby boys being given the name Glenn. Its ranking then was #55. The baby name has since steeply fallen in popularity, and is currently of very modest use. Among all boy names in its group, Glenn was nonetheless the most widely used in 2018. In the past century Glenn has predominantly been a baby boy name. In 1908, baby boys named Glenn outnumbered girls by 31 times. 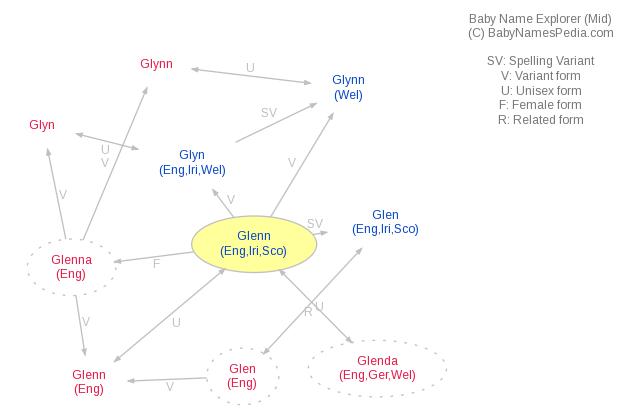