What does Gordon mean?

[ 2 syll. gor-don, go-rd-on ] The baby boy name Gordon is pronounced as GAORDahN †. Gordon is of Celtic origin, and it is used largely in the English and Scottish languages. The name's meaning is 'great hill'. It is from gor meaning 'great' ; dun 'hill, fort'. The first name is derived from the Scottish family name of a famous clan; the surname is itself from a place name. The place name could be from a city in France with the name Gourdon, or else Gordon in Berwickshire of Scotland. The name has a strong Scottish flavor, but it has been generally adopted by English speakers from the late 19th century, when it was sometimes bestowed in honor of the British general Charles George Gordon (1833-1885) following his death at Khartoum.

Gordon has 18 forms that are used in English and foreign languages. Forms used in English include Gordain, Gordea, Gordee, Gordey, Gordi, Gordin, Gordion, Gordius, Gordo, Gordun, Gordyn, and Gorton. Other English forms include the contraction Gord, the diminutive forms Gordie and Gordy, and the variant spellings Gordan and Gorden. The Scottish Geordan is a form of Gordon that is in foreign languages.

Gordon is an all-time favorite. Currently it is still somewhat popular as a baby name for boys, though not to the extent it was in the past. Its usage peaked modestly in 1934 with 0.248% of baby boys being given the name Gordon. It ranked at #71 then. The baby name has since experienced a substantial decline in frequency, and it is of only very light use in recent years. In 2018, it ranked at #823 with a usage of 0.014%, but it was nonetheless the most widely used among all boy names in its group. 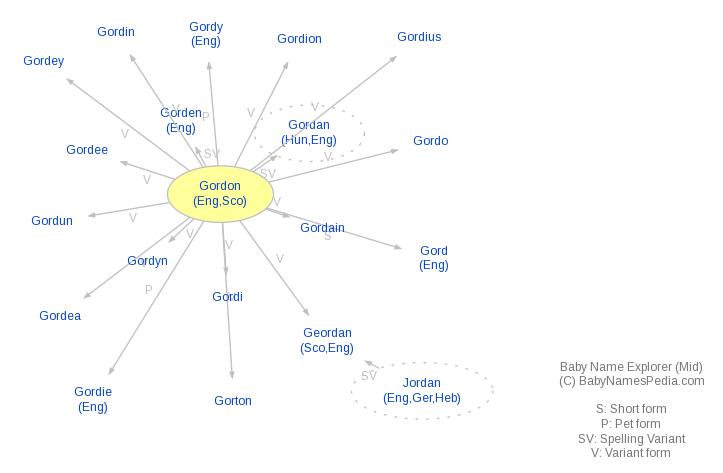