What does Grace mean?

[ syll. gra-ce, gr-ace ] The baby girl name Grace is pronounced as GR-Z †. Grace is used predominantly in the English and French languages, and its origin is Latin. Gratia (Latin) is an original form of Grace. The name is from the English word 'grace', which is from the Latin 'gratia' (meaning charm, grace). The name was borne in Roman mythology by the three daughters of Zeus, who were called the Graces. Among Christians, the meaning of the name is associated with the 'grace of God'. The name, among other virtue names, was taken up by English Puritans in the 17th century. It saw a revival in the 19th century, due to the British heroine Grace Darling (1815-1842) who famously helped her lighthouse keeper father save sailors in a storm in 1838. In the 20th century, the name saw another boost from the actress Grace Kelly (1928-1982), who married Prince Rainier of Monaco. In Ireland, the name is sometimes used as an Anglicized form of the Gaelic Gráinne.

What are the Variant Forms of Grace?

Grace is very popular as a baby name for girls. Its usage peaked in 1901 with 0.943% of baby girls being given the name Grace. It ranked at #15 then. The baby name has since markedly declined in popularity, and is of occasional use in recent years. In 2018, its usage was only 0.364% and its ranking #24, but it was nonetheless the most popular among all girl names in its group. In 2018, 4 times more girls were named Grace than the next most popular name, Gracie. Grace has mostly been a girl name, though in the past century it has also been used for boys. In 1911, the name Grace was given to 138 times as many girls than boys. 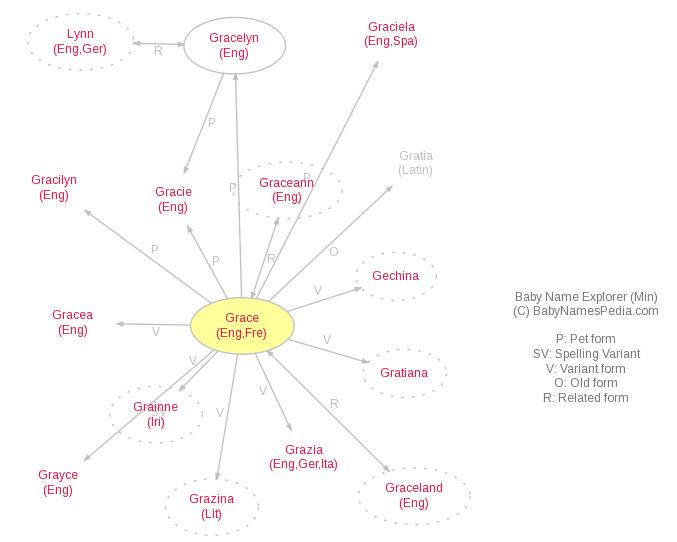