What does Grady mean?

[ 2 syll. gra-dy, gr-ady ] The baby boy name Grady is pronounced as GREY-Diy- †. Grady has its origins in the Celtic language. It is used largely in English and Irish. The meaning of Grady is 'son of Grádaigh'. It is from the word gradach which is of the meaning 'noble'. The first name is derived the English surname Grady. Like O'Grady, the latter is itself from the Irish surname 'Ó Grádaigh' meaning 'descendant of Grádaigh or Gráda'. Grádaigh or Gráda is possibly of the meaning 'noble'.

Grady is rather popular as a baby boy name. Its usage peaked in 1911 with 0.071% of baby boys being named Grady. It was #180 in rank then. The baby name has experienced a substantial decline in frequency since then, and is in recent times of only modest use. In 2018, it ranked at #412 with a usage of 0.040%, but it was nevertheless the most commonly used among all boy names in its family. 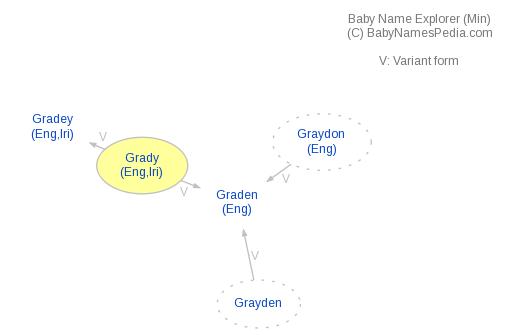