What does Grant mean?

[ 1 syll. gran(t), gr-a-nt ] The baby boy name Grant is also used as a girl name, but it is much more common for boys. Its pronunciation is GRahNT †. Grant is largely used in the English and Scottish languages, and its origin is Old French. The first name is from the Scottish surname, which is itself from the Norman French 'grand' (meaning great, large). The first name was adopted by English speakers in the 19th century. In the USA and Canada, the name is sometimes bestowed in tribute to the US president Ulysses S. Grant (1822-1885), who was a general in the Civil War. In the late 20th century, the popularity of the name was boosted in the UK through the character Grant Mitchell in Eastenders, a popular and award-winning television soap opera.

Grant is popular as a baby name for boys. The name's popularity rose from the 1940s up to the 1990s. At the modest height of its usage in 1997, 0.166% of baby boys were given the name Grant. Its ranking then was #114. The baby name has since experienced a loss in popularity. In 2018, its usage was 0.112% and its ranking #182, but it was nonetheless the most frequently used within all boy names in its group. Grant has predominantly been a baby boy name in the past century. 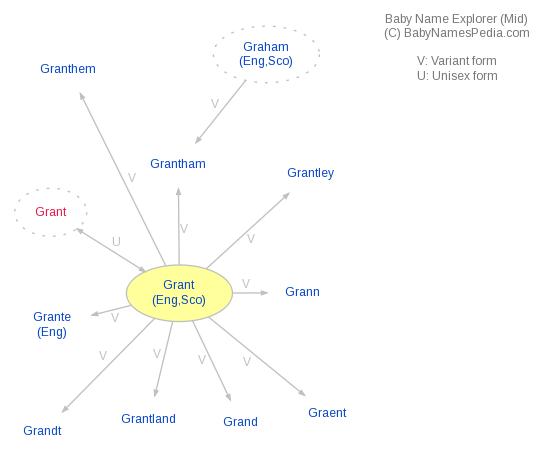