What does Greta mean?

[ 2 syll. gre-ta, gr-eta ] The baby girl name Greta is pronounced GREHT-ah (English) or GREH-Taa (German) †. Greta is of Old Greek origin, and it is used mainly in English, German, Polish, Scandinavian, and Austrian.

Greta is a contracted form of the English and German Gretchen.

Variant forms inherit the origin and thus the meaning of the name Greta.

Greta is fairly popular as a baby name for girls. At the modest peak of its usage in 1932, 0.036% of baby girls were named Greta. It ranked at #318 then. The baby name has since suffered a marked drop in frequency, and is of only irregular use in recent times. In 2018, it ranked at #587 with a usage of 0.028%. Out of the group of girl names directly related to Greta, Margaret was the most popular. It was used 4 times more than Greta in 2018. 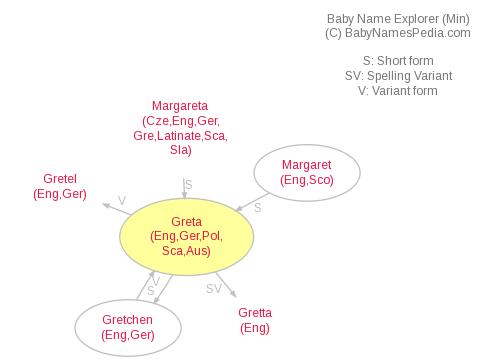