What does Gretchen mean?

[ 2 syll. gret-(c)hen, gr-etch-en ] The baby girl name Gretchen is pronounced as GREHCH-ahN (English) or GREHT-K-ehN (German) †. Gretchen is used chiefly in English and German. It is derived from Old Greek origins. The name was adopted by English speakers in the 19th century, promoted by a character so named in Goethe's Faust (1808).

Gracen (English), Gretchan, Gretchin, and Gretchun are variants of Gretchen.

Variant forms share the origin and meaning of Gretchen.

Gretchen is rare as a baby girl name. At the modest peak of its usage in 1973, 0.087% of baby girls were named Gretchen. It was #192 in rank then. The baby name has suffered a substantial loss in popularity since then, and is today of irregular use. In 2018, out of the family of girl names directly related to Gretchen, Margaret was the most popular. 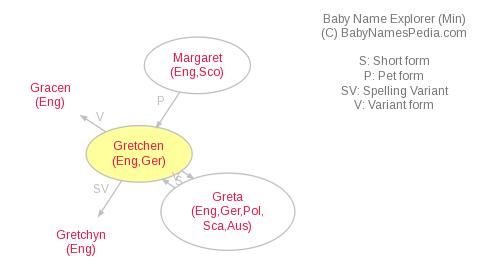