What does Guadalupe mean?

[ 4 syll. gua-da-lu-pe, gu-adal-upe ] The baby boy name Guadalupe is also used as a girl name, and more often so. Its pronunciation is GWah-DaaLUW-Pey- †. Guadalupe is used chiefly in the English and Spanish languages, and its origin is Arabic. It is derived from the elements 'guada' meaning river ; 'lupe' wolf ; 'wadi al-lubb' wolf river. The first name is from the Spanish place name in the province of Cáceres, where there is a famous late 13th century monastery, the Santa María de Guadalupe. The place name is ultimately of the Arabic 'wadi al-lubb'. The first name refers to a title of the Virgin Mary, Our Lady of Guadalupe; the title was supposedly spoken by Mary herself in an apparition to a Mexican peasant in 1531. Traditionally, Maria was considered too sacred to use, therefore girls were often christened with other associated names. The name has often been adopted by Spanish speakers and Mexican immigrants in the USA in tribute to the Virgin Mary.

Lupe (Spanish contraction) is another variant of Guadalupe.

Guadalupe is rare as a baby name for boys. At the modest peak of its usage in 1931, 0.030% of baby boys were given the name Guadalupe. It ranked at #308 then. The baby name has since markedly declined in popularity, and is today of infrequent use. Out of all boy names in its group, Guadalupe was nonetheless the most regularly used in 2018. There were times from 1901 to 1910 when more boys than girls were named Guadalupe, but currently it is more often than not a girl name. In 2006, the name Guadalupe was given to 7 times as many girls than boys.

Baby names that sound like Guadalupe include Godelief, Godelive, Gotthelf, Gotthilf, and Gottlieb. 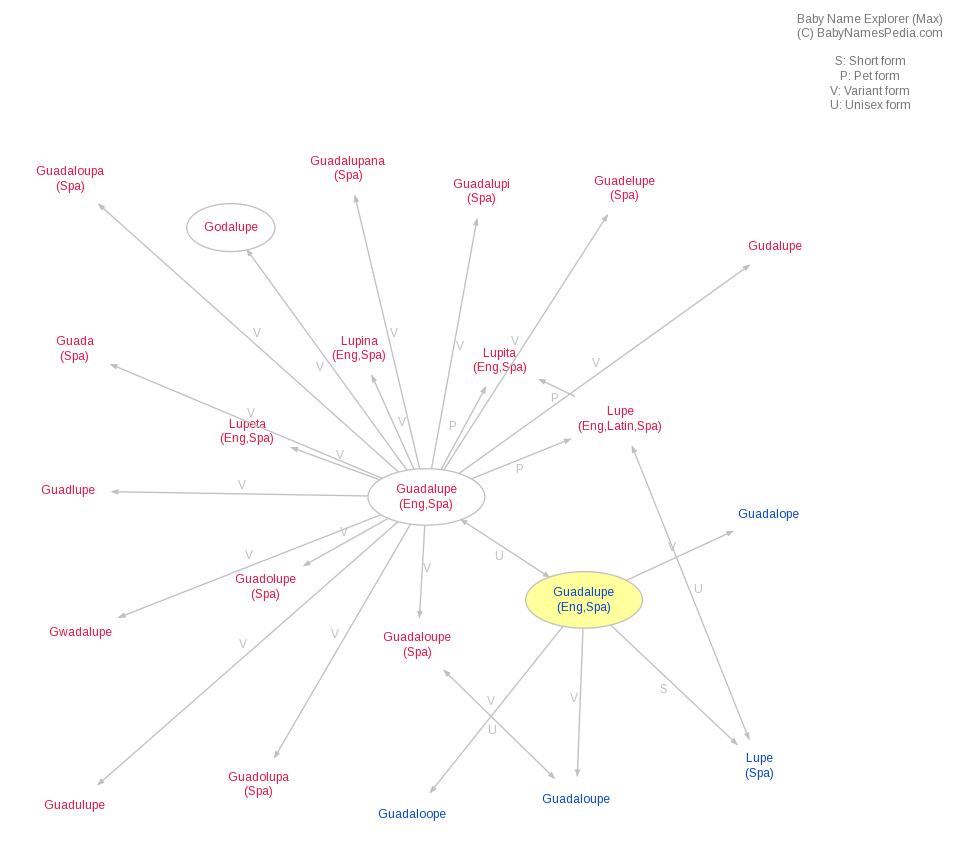