What does Gus mean?

[ 1 syll. gus, gu-s ] The baby boy name Gus is also used as a girl name, but it is much more common for boys. Its pronunciation is GAHS †. Gus is used predominantly in the English, Irish, Latin, Scandinavian, Scottish, and Greek languages, and its origin is Celtic, Latin, and Old Norse. The name evolved as a diminutive of other longer names such as August, Angus, and Gustav. It was first adopted by English speakers in the 19th century. It later appeared in T. S. Eliot's poem Gus: the Theatre Cat (1939) as the name of a cat whose full name is Asparagus.

Gus is also a contraction (English, Irish, and Scottish) of the name August (English, German, Polish, and Scandinavian).

Gus is also a contraction (English, Irish, and Scottish) of the name Augustine (Irish and English).

Gus is also a contraction (Greek) of the name Constantine (English).

Gussy, Gust, Gusti, and Gusty are variants of Gus.

Gus is a classic favorite. Today it is still somewhat popular as a baby name for boys, though it was in more widespread use previously. In 1900, 0.074% of baby boys were given the name Gus. It ranked at #174 then. The baby name has since fallen out of favor, and it is used on an infrequent scale in recent years. In 2018, its usage was only 0.011% and its ranking #994. Within the group of boy names directly linked to Gus, August was the most regularly used. In 2018, it was used 11 times more than Gus. Gus has in the past century been mostly given to baby boys. 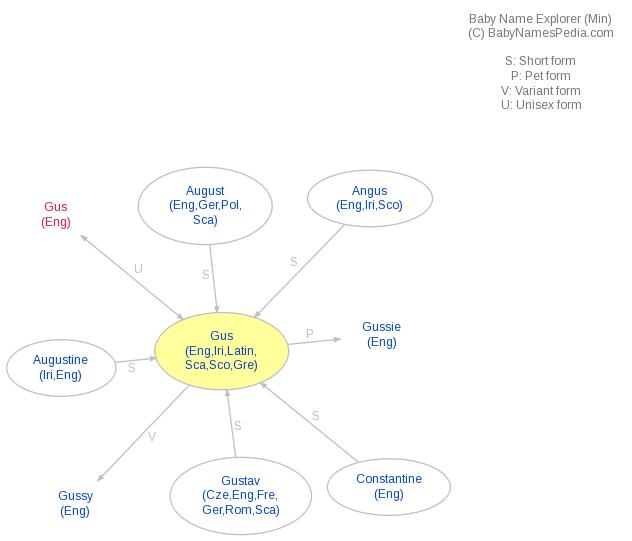