What does Guy mean?

[ 1 syll. guy, gu-y ] The baby boy name Guy is pronounced GAY (English) or GIY (French) †. Guy's language of origin is Germanic, and it is used largely in the English and French languages. The name is Latinized via French from Wido (Germanic), the short form of Germanic names with the first element wit or witu (meaning 'wood, forest') and thus beginning with 'Wid-' or 'Wit-'. The 'W-' prefix became 'Gu-' in Norman French, resulting in the Norman forms Guido or Gy.

The name was introduced by Normans into England in the 11th century. It was borne by various saints in the medieval period. It later became a popular name, largely influenced by Guy of Warwick, a legendary English romance hero well-known in England and France from the 13th to 17th centuries. The name is also known from the wicked Guy of Gisbourne in Robin Hood legends and folklore. It dropped off in use by the early 17th century after Guy Fawkes gained notoriety for trying to blow up the King and the Parliament in his failed Gunpowder Plot (1605). In the 19th century, the name was re-introduced to English speakers through Walter Scott's novel Guy Mannering (1815), as well as Edgar Allen Poe's poem Lenore (1843) in which Guy de Vere is the fiance of the titular maiden.

Guy is rare as a baby name for boys. In 1900, 0.148% of baby boys were given the name Guy. It ranked at #99 then. The baby name has since suffered a substantial drop in popularity, and is of only sporadic use now. In 2018, out of the group of boy names directly linked to Guy, Wyatt was the most commonly used. 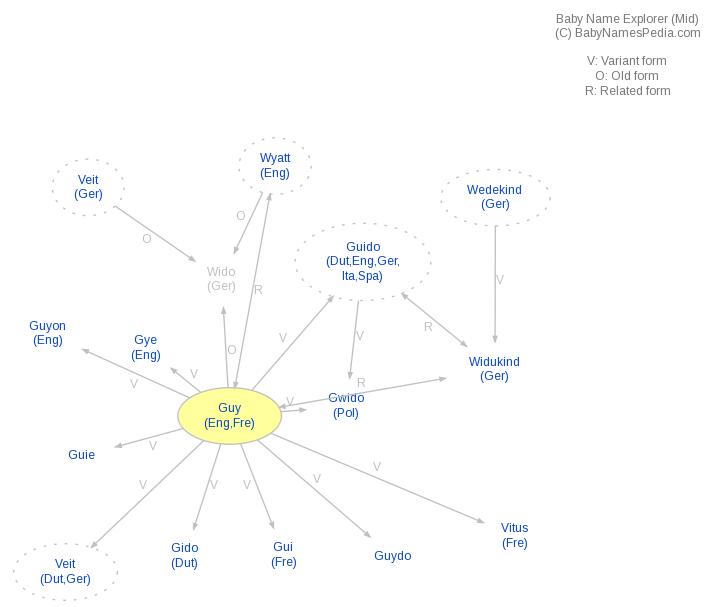