What does Gwyneth mean?

[ 2 syll. gwy-net(h), gw-yne-th ] The baby girl name Gwyneth is also used as a boy name, though it is far more popular for girls. It is pronounced GWIHN-eh-TH †. Gwyneth has its origins in the Welsh language. It is used largely in English and Welsh. The name could be derived from the Welsh gwynaeth (meaning 'happiness, luck'), or else it could be from Gwynedd. It was first adopted by English speakers in the late 19th century, popularized by the Welsh novelist Ann Harriet Hughes (1852-1910) who wrote under the pen name Gwyneth Vaughan.

In addition, Gwyneth is an English form of the English and Welsh Gwendolen.

The name Gwyneth is used to a great extent; it has 29 forms that are used in English and foreign languages. English forms of the name include Gweneth (used in Welsh too), Gwenette, Gwenisha, Gwenita, Gwennan, Gwennetta, Gwennyth, Gwineth, Gwinn, Gwinne, Gwinneth, Gwinyth, Gwynaeth, Gwynedd, Gwynith, Gwynn, Gwynna, Gwynne, Gwynneth, and Venetia. Other English variants include the contracted forms Gwen (used in Welsh too) and Gwyn, and the diminutives Gwenetta, Gwin, Gwinnie, and Gwinny. Forms used in foreign languages include the Welsh Gwenith and the Welsh Gwenneth. The spelling variant Gwenyth (Welsh) is another foreign form.

Gwyneth is rare as a baby girl name. At the modest peak of its usage in 2013, 0.015% of baby girls were named Gwyneth. It had a ranking of #891 then. The baby name has suffered a substantial drop in frequency since then, and is of only irregular use now. In 2018, out of the family of girl names directly related to Gwyneth, Gwen was the most popular. Gwyneth has mainly been a baby girl name in the last century. 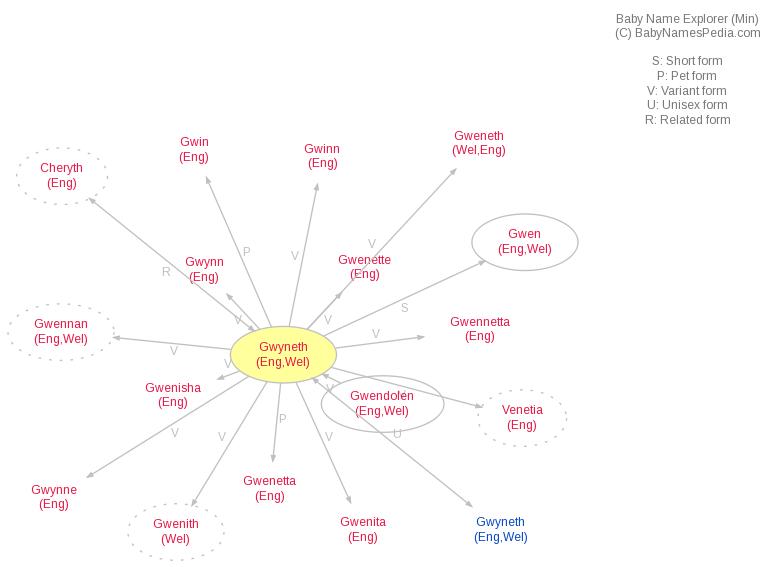