What does Hadad mean?

[ 2 syll. ha-dad, had-ad ] The baby boy name Hadad is pronounced as HHaa-DAA-D †. Hadad is primarily used in Arabic and English, and its language of origin is Aramaic. Hadad is of the meaning thunder. In Semitic mythology, this was the name of the god of thunder and storms; in Babylonian-Assyrian mythology, his equivalent was Adad, and in Sumerian mythology, Ishkur. In the Bible, the name was borne by two kings, one who defeated the Midianites, and another who was also called Hadar.

Hadad is not popular as a baby name for boys. It is not in the top 1000 names. 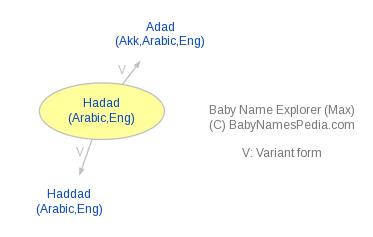