What does Halcyon mean?

[ 3 syll. hal-cyon, ha-lcy-on ] The baby girl name Halcyon is also used as a boy name. It is pronounced HHAELSiy-ahN †. Halcyon's language of origin is Old Greek and it is predominantly used in English. The name Halcyon means 'kingfisher; calm or tranquil; happy or carefree'. It is derived from alkyon meaning 'kingfisher' ; halkyon 'kingfisher' ; hals 'sea'. Halcyon is a genus of kingfisher birds; the name thus means 'kingfisher'. Etymologically, the name is Latinized from Halkyone (Greek), which is itself a variant of 'Alkyone'. The root elements are the Greek alkyon and halkyon, with the 'h' added by mythological associations. Ovid wrote in Roman mythology that Alcyone's father Aeolus, the god of the winds, held back the storms whenever Alcyone, as a kingfisher, laid her eggs on the beach. This gave rise to the term 'halcyon days', the mythical seven days in winter when storms do not occur. The word 'halcyon' has thus been interpreted to mean 'calm or tranquil', or 'happy or carefree'.

The diminutives Halci and Halley are other forms of the name.

Halcyon is not often used as a baby girl name. It is not in the top 1000 names. 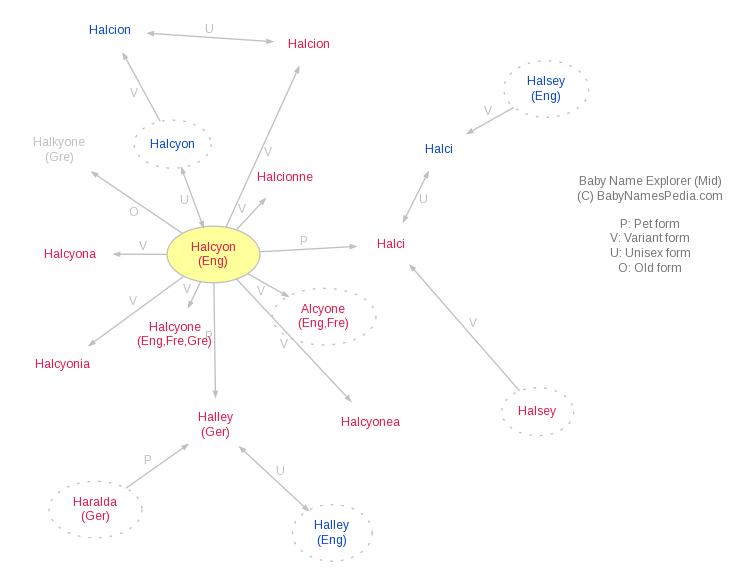