What does Hamish mean?

[ 2 syll. ha-mis(h), ham-i-sh ] The baby boy name Hamish is pronounced as HHEY-Mih-SH †. Hamish is used predominantly in the Scottish language. Its origin is Scottish and Hebrew. The name is Anglicized from Sheumais, which is a variant of Seumas, the Scottish version of James. The name was adopted by English speakers in the mid 19th century. It has strong Scottish associations, but is today generally used in English speaking countries.

In addition, Hamish is a variation (Scottish) of the name Jacob (Dutch, English, German, and Scandinavian).

Hamish is also a variation (Scottish) of the name James (English and Hebrew).

Both the origin and meaning of Hamish is inherited by all variant forms.

Hamish is an unusual baby boy name. It is not listed in the top 1000. In 2018, within the family of boy names directly linked to Hamish, James was the most popular. 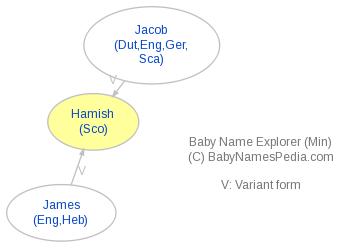