What does Han mean?

[ 1 syll. han, ha-n ] The baby girl name Han is also used as a boy name. It is pronounced HHae-N †. Han's origin is Hebrew and Chinese, and its use, English and Chinese. From Chinese roots, its meaning is 'Chinese (race); self-restraint; to contain' - in this context, Han can be used in the Chinese language. See Han for more information.

In addition, Han is a shortening (English) of the English, French, German, Hebrew, and Yiddish Hannah and a form (English) of Anna.

Han is also a familiar form (English) of Hanna.

Han is also a familiar form (English) of the Czech, Dutch, English, Estonian, Finnish, German, Hungarian, and Scandinavian Johanna and a form of the English Jane.

Han is not often used as a baby girl name. It is not in the top 1000 names. In 2018, within the family of girl names directly related to Han, Hannah was the most widely used. 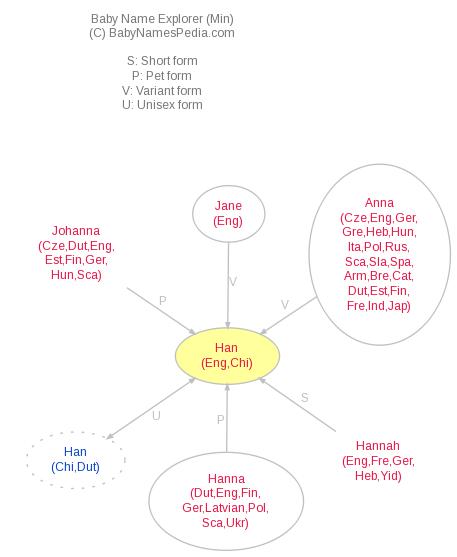