What does Harley mean?

[ 2 syll. har-ley, ha-rl-ey ] The baby girl name Harley is also used, though less often, as a boy name. It is pronounced as HHAARLiy- †. Harley is of Old English origin and it is used mainly in English. The name Harley means 'hare clearing, hare meadow'. It is derived from hara which means 'hare' ; leah 'wood, clearing, meadow'. See Harley for more information.

Harley is popular as a baby girl name, and it is also perceived as trendy. The name has been growing in popularity since the 1990s; prior to that, it was of only sporadic use. Its usage peaked modestly in 2017 with 0.081% of baby girls being named Harley. It had a ranking of #202 then. In 2018, it ranked at #225 with a usage of 0.075%, and it was the most popular among all girl names in its family. Harley was thrice as popular as the 2nd most popular name, Harlee, in 2018. Although Harley is used more commonly as a baby girl name today, there was a period prior to 1992 that it was more popular with boys. After 1993, increasingly the name became more popular with baby girls than with boys. There were 4 times more baby girls than boys who were named Harley in 2017. 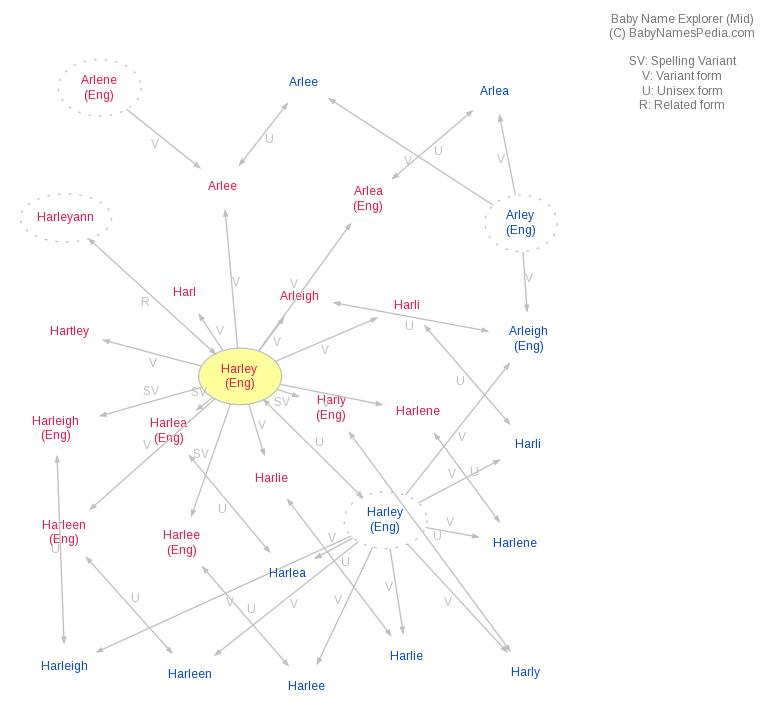