What does Harley mean?

[ 2 syll. har-ley, ha-rl-ey ] The baby boy name Harley is also used as a girl name, and it is more frequently a girl name. It is pronounced as HHAARLiy- †. Harley is used chiefly in the English language and it is derived from Old English origins. The name's meaning is hare clearing, hare meadow. It is derived from the elements 'hara' meaning hare ; 'leah' wood, clearing, meadow. The first name is from an English family name, which is itself taken from a place name. It was first used in the 19th century as a boy name.

Harley is a classic favorite. At present it is still a somewhat popular baby name for boys, though to a lesser extent than it was in the past. Its usage peaked modestly in 1902 with 0.062% of baby boys being given the name Harley. It ranked at #196 then. The baby name has since declined in popularity, and in recent years it is of occasional use. In 2018, its usage was only 0.015% and its ranking #781, but it was nonetheless the most popular among all boy names in its group. Though Harley is currently more often than not a girl name, there was a period before 1992 when more boys were given the name. From 1993 on, increasingly more girls than boys were named Harley. In 2017, the name Harley was given to 4 times as many girls than boys. 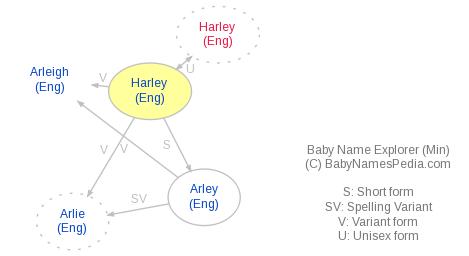