What does Hasan mean?

[ 2 syll. ha-san, has-an ] The baby boy name Hasan is pronounced as HHaa-SAE-N †. Hasan is largely used in the Arabic and English languages, and its origin is Arabic. The name's meaning is good, beautiful, beautifier. It is derived literally from the word 'hasan' meaning good, beautiful. Al-Hussein was the younger brother of Al-Hasan and a grandson of Muhammad; his death in 680 led to the foundation of the Shiite Muslim sect. The name is in recent times known from King Hussein of Jordan (1935-1999). It is a commonly used Islamic name; Hassan and Hussain in particular are often bestowed upon twins. Among the Hausa people of Nigeria, Hasani is traditionally given to a boy who is the first-born of twins. The second-born twin, if he is a boy, is often named Husseini. The name Hasana (Arabic) is the female equivalent of Hasan.

Hasan is unusual as a baby name for boys. Its usage peaked modestly in 1978 with 0.005% of baby boys being given the name Hasan. It ranked at #952 then. The baby name has since fallen in popularity, and is now of sporadic use. Among the group of boy names directly linked to Hasan, Hassan was the most frequently used in 2018. 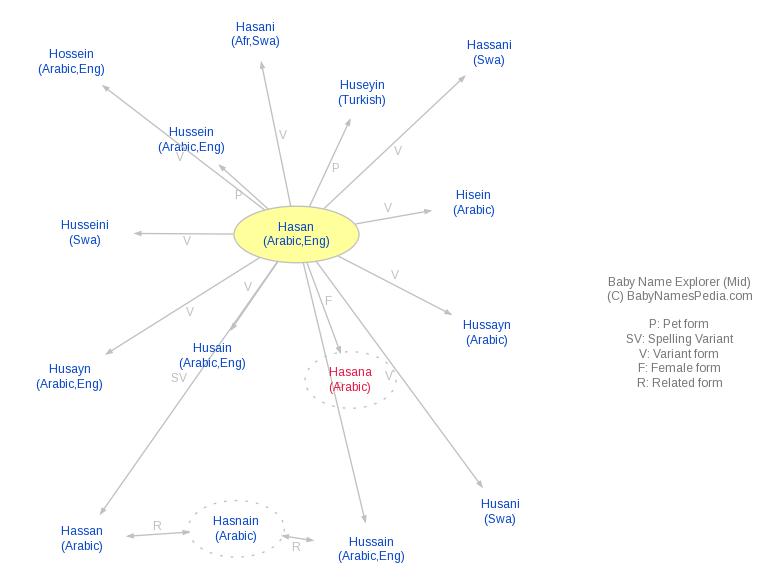