What does Hasso mean?

[ syll. has-so, ha-sso ] The baby boy name Hasso is pronounced HHAES-ow †. Hasso's language of origin is Germanic and it is used mainly in the German language. The meaning of the name is 'man from Hessen'. It is derived from the word hassi which means 'Hesse'. The name is from a Germanic tribe in Hesse, one of the largesst regions in the Rhine Main Area. The name was used mainly by German nobility in medieval times, but today it is commonly used as a dog's name.

Hasso is unusual as a baby boy name. It is not listed in the top 1000. 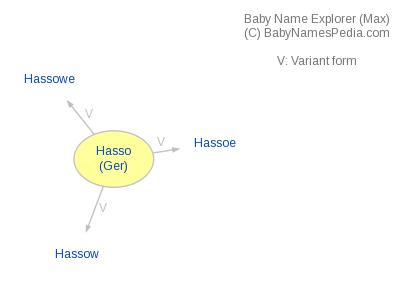