What does Hayden mean?

[ 2 syll. hay-den, ha-yd-en ] The baby boy name Hayden is also used, but less often, as a girl name. It is pronounced as HHEY-DehN †. Hayden is largely used in the English language and it is derived from Germanic origins. It is from the element 'heidano' which means heathen. The first name is likely to be derived from the surname of Josef Haydn (1732-1809), one of the most prominent composers of the classical period. His surname was itself of the byname Heiden. The first name could also have developed as a Welsh form of the Celtic Aidan.

What are the Variant Forms of Hayden?

Hayden is popular as a baby name for boys. The name's popularity jumped from the 1980s up to the 2000s. Its usage peaked modestly in 2006 with 0.296% of baby boys being given the name Hayden. Its ranking then was #73. The baby name has since experienced a fall in popularity. In 2018, its usage was 0.112% and its ranking #180, but it was nonetheless the most popular among all boy names in its group. Hayden has predominantly been a baby boy name in the past century. In 2017, 60% more baby boys than girls were given the name Hayden. 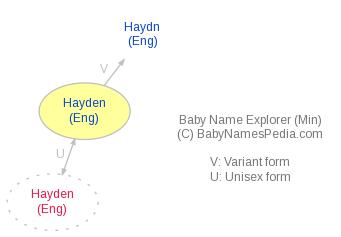