What does Heaven mean?

[ 2 syll. hea-ven, he-av-en ] The baby girl name Heaven is pronounced as HHEHV-ehN †. Heaven is used predominantly in the English language and its origin is also English. A biblical name, its meaning is derived literally from the ordinary word 'heaven'. The first name is from the common word associated with the Christian concept of paradise.

Heaven is rather popular as a baby girl name. The name's popularity jumped from the 1980s up to the 2000s; before that, it was of irregular use only. At the modest height of its usage in 2005, 0.066% of baby girls were given the name Heaven. It was #245 in rank then. The baby name has declined in popularity since then. In 2018, its usage was 0.045% and its ranking #374, but it was nonetheless the 2nd most popular after Haven, within all girl names in its family. In 2018, it was 28% more frequently used than Heaven. 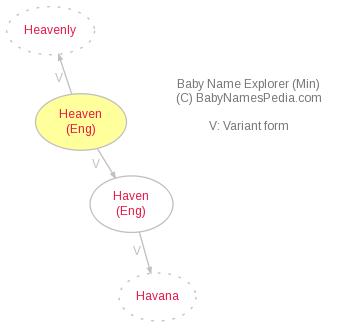