What does Hedwig mean?

[ 1 syll. he-dwi(g), hed-w-ig ] The baby girl name Hedwig is also used as a boy name, though the use for girls is far more popular. It is pronounced as HHT-WihG †. Hedwig's language of origin is Germanic. It is predominantly used in English and German. It is a two-element name derived from hadu and wig with the meanings 'struggle' and 'fighter, warrior' respectively. An original form of the name is Haduwig (Germanic). The forms Hedwig and Jadwiga were borne by various saints in the medieval period. The name was later made known to English speakers by the central character Hedvig Ekdal from the Henrik Ibsen play The Wild Duck (1884). In recent times, it has appeared as the name of Harry's pet owl Hedwig in the Harry Potter (1997-2007) series by J. K. Rowling.

Hedwig is an unusual baby girl name. Its usage peaked modestly in 1915 with 0.015% of baby girls being named Hedwig. It had a ranking of #505 then. The baby name has experienced a steep decline in frequency since then, and is used only on a very light scale now. Among all girl names in its family, Hedwig was nevertheless the most commonly used in 2018. In the last century Hedwig has mainly been a baby girl name. 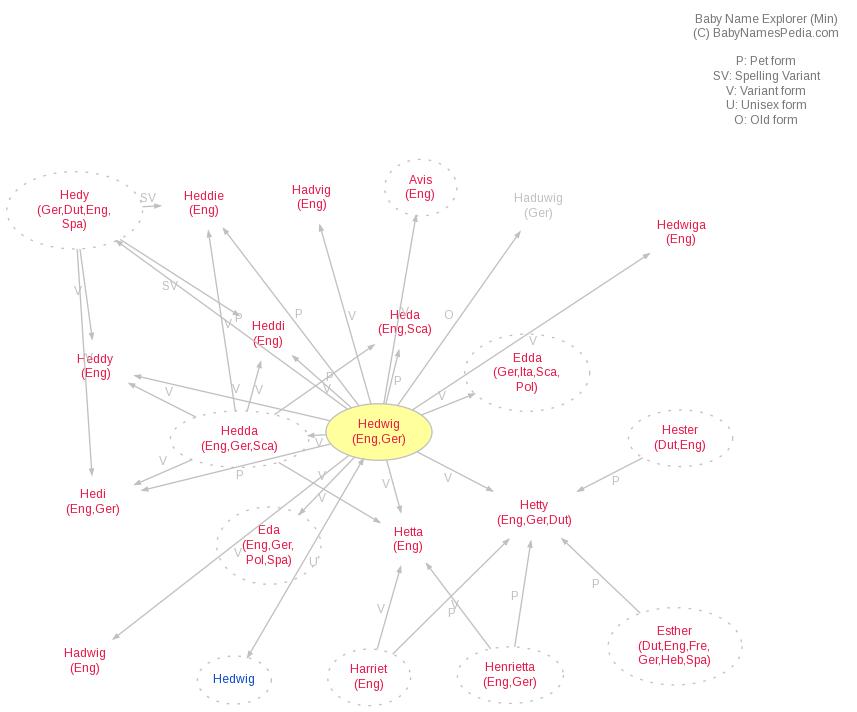