What does Helena mean?

[ 3 syll. he-le-na, hel-ena ] The baby girl name Helena is pronounced in Danish, German, Norwegian, Polish and Swedish as HHeh-LEH-Naa, or in Dutch as HHey-LEY-Naa †. Helena is of Old Greek origin, and it is used largely in the Czech, Dutch, English, Finnish, German, Greek, Hawaiian, Polish, Portuguese, Scandinavian, and Spanish languages. Helena is a variation of Helen (English).

Helena is fairly popular as a baby name for girls. Its usage peaked modestly in 1902 with 0.047% of baby girls being given the name Helena. It ranked at #270 then. The baby name has since experienced a substantial decline in popularity, and is in recent years of only irregular use. In 2018, it ranked at #458 with a usage of 0.037%, but it was nonetheless the 2nd most popular after Helen, among all girl names in its group. It was used 9.485% more than Helena in 2018. 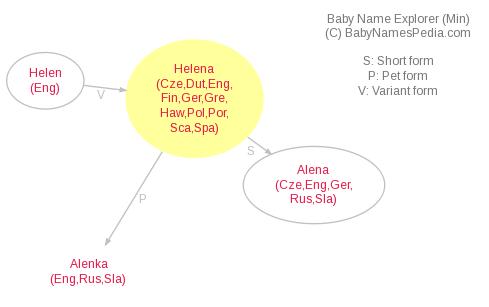