What does Helga mean?

[ 2 syll. hel-ga, he-lga ] The baby girl name Helga is pronounced HHEHL-Gaa in German †. Helga is of Old Norse origin. It is used mainly in English, German, and Scandinavian. It is derived from heilagr meaning 'prosperous, successful, holy, blessed' ; heill 'healthy, safe, whole'. The name was already in use by English speakers prior to the Norman Conquest; it fell into disuse soon after, before enjoying a revival among 20th century English speakers through an introduction from Germany and Scandinavia. Helga is the feminine form of the German and Scandinavian Helge.

Helga is a widely used name; it has 22 forms that are used in English and foreign languages. English forms of the name include Elga, Helg, Helje, Olga (used in Armenian, Hungarian, Polish, Portuguese, Russian, and Slavic as well), Olia, and Olva.

Helga is uncommon as a baby girl name. At the modest height of its usage in 1907, 0.007% of baby girls were named Helga. It had a ranking of #778 then. The baby name has slipped in popularity since then, and is of only sporadic use today. Within all girl names in its family, Helga was nevertheless the most frequently used in 2018. 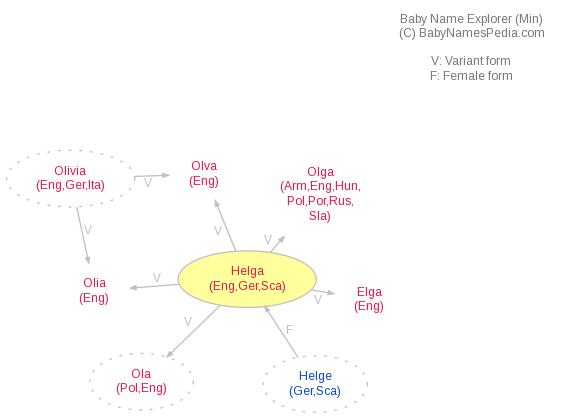