What does Henrietta mean?

[ 4 syll. he-nriet-ta, hen-rie-tta ] The baby girl name Henrietta is pronounced HHehNRiy-EH-Taa- or HHEHNRiy-iyTaa- †. Henrietta is of Germanic origin. It is used mainly in English and German. The name Henrietta means 'house owner, lord of the manor'. It is a two-element name derived from heim and ric which are of the meanings 'home, homeland' and 'rich, powerful, ruler' respectively. The name was adopted by English speakers in the 17th century, promoted by Henriette-Marie or Henrietta Maria (1609-1669), Princess of France and Queen Consort of England, Scotland and Ireland from her marriage to Charles I. The name Henrietta is a Latinate form of Henriette, the feminine equivalent of the French Henri. The name Henrietta saw a revival in popularity in the late 19th century. It is sometimes used in Scotland as an Anglicized form of the Gaelic Oighrig.

Henrietta is a form of the English Harriet.

Henrietta is the feminine version of the English Henry.

Henrietta is uncommon as a baby girl name. At the height of its usage in 1902, 0.156% of baby girls were named Henrietta. It had a ranking of #128 then. The baby name has fallen out of favor since then, and is currently used only on a very modest scale. Within the family of girl names directly related to Henrietta, Hattie was the most popular in 2018.

Baby names that sound like Henrietta include Honorata (Polish), Hanriette, and Henriete (Latvian). 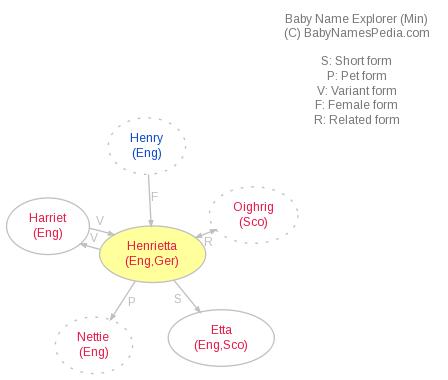