What does Henriette mean?

[ 3 syll. he-nriet-te, hen-rie-tte ] The baby girl name Henriette is pronounced as aoN-Riy-EHT (French) or HHehN-Riy-EH-Tah (German) †. Henriette is used predominantly in the English, French, Dutch, German, and Scandinavian languages, and it is derived from Germanic origins.

Henriette is a variation (English and French) of the name Harriet (English).

Henriette is also a variation (Dutch, French, German, and Scandinavian) of the name Henrietta (English and German).

Variations of Henriette include the contractions Jet (Dutch), Jette (German), and Jetty (German).

Henriette is rare as a baby name for girls. At the peak of its usage in 1903, 0.006% of baby girls were given the name Henriette. It ranked at #823 then. The baby name has since experienced a loss in popularity, and is currently of very modest use. Out of all girl names in its group, Henriette was nonetheless the most regularly used in 2018. 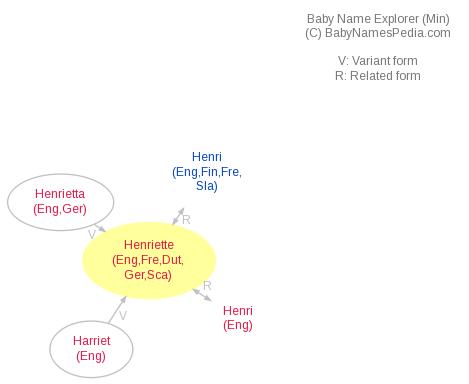