What does Herbert mean?

[ 2 syll. her-ber(t), he-rbe-rt ] The baby boy name Herbert is pronounced HHAHR-BahRT (English), ehR-BEHR (French), or HHEHR-BehRT (Polish) †. Herbert's language of origin is Germanic, and it is predominantly used in English, French, German, and Polish. Herbert is of the meaning 'army-bright, bright army'. It is a two-element name derived from heri which means 'army, warrior' ; berht 'bright, famous'. Old forms of the name include Hariberht (Old English), Herebeorht (Old English), and Heribert (Germanic). The name was borne in an early form by Charibert, the 6th-century king of the Franks. It was also borne by Saint Heribert (970-1021), who was Archbishop of Cologne and Chancellor of Emperor Otto III. The name was brought by the Normans to England; the continental form displaced the Old English form of the name which was used before the Conquest. The first name was commonly used by English speakers during the medieval times but it fell into disuse after the 13th century. It was subsquently known mostly as the surname of the earls of Pembroke, a prominent family in the 16th and 17th centuries of which the Welsh poet and priest George Herbert was a famous member. The first name regained popularity in the 19th century, due to the connection with the aristocratic surname as well as the revival in medieval Germanic names then.

The name Herbert is widely used; it has 31 variant forms that are used in English and foreign languages. English variant forms include Ebert, Harbin, Harbirt, Harburt, Hebert, Heberto, Herbea, Herbee, Herbey, Herbi, Herbirt, Herbord, Herbort, Herbst, Herburt, Herby, Hébert, and Hurbert. Other English variants include the shortenings Bert (used in Dutch and German too), Erbert, and Herb, and the pet forms Bertie and Herbie.

Herbert is a rare baby name for boys. At the peak of its usage in 1929, 0.710% of baby boys were named Herbert. Its ranking then was #25. The baby name has since suffered a steep drop in frequency, and is used only on a very modest scale today. Out of all boy names in its group, Herbert was nevertheless the most regularly used in 2018. 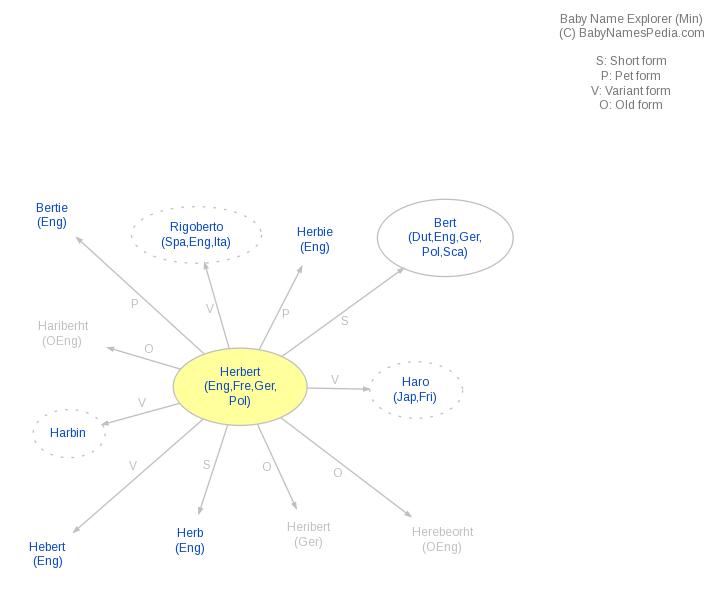