What does Hermione mean?

[ 4 syll. her-mio-ne, he-rmi-one ] The baby girl name Hermione is pronounced HHahR-MAY-ah-Niy in English †. Hermione's origin is Old Greek, and its use, English and Greek. Hermione's meaning is 'dedicated to Hermes'. The name is derived from Hermes, the name of the Greek messenger god. In Greek mythology, Hermione was the daughter of Menelaus and Helen who was married to Achilles' son Neoptolemus, and later to her cousin Orestes. Her story was made known by Euripides' play Andromache (425BC), and the name was subsequently adopted by English speakers during the medieval times. The name was further promoted in the 17th century by Jean Racine's play Andromaque (1667), an adaptation of Euripides' work, and Shakespeare's play The Winter's Tale (1611), in which Hermione is the name of a major character, the queen of Leontes. The name has also appeared in Walter Scott's novel The Fortunes of Nigel (1822). It is today famous from the girl wizard in J.K. Rowling's Harry Potter series (1997-2007), but this association does not seem to have boosted the adoption of the name.

In addition, Hermione is a variant form of the German, Hungarian, and Latinized Hermia.

Hermione is not widely used as a baby name for girls. It is not in the top 1000 names.

A baby name that sounds like Hermione is the name Hazarenan. 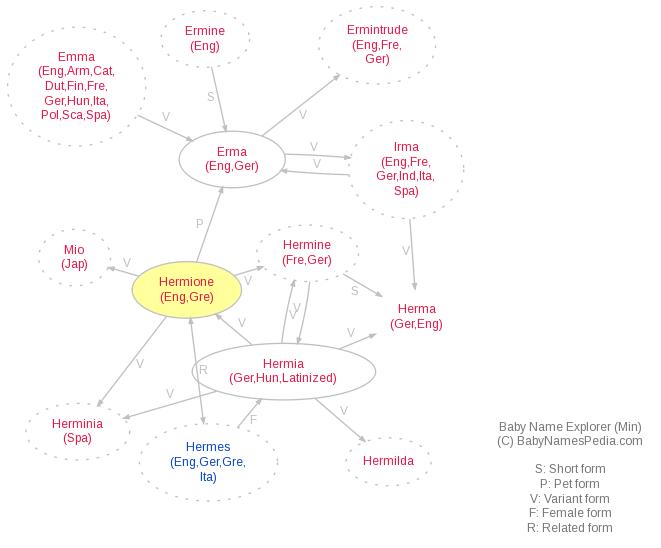