What does Hie mean?

[ 2 syll. hie, hi-e ] The baby girl name Hie is also used as a boy name. It is pronounced HHIY-eh- †. Hie's language of origin is Hawaiian and it is also predominantly used in Hawaiian. The name Hie means 'distinguished'. 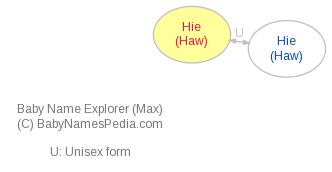