What does Hilary mean?

[ 3 syll. hi-la-ry, hil-ary ] The baby boy name Hilary is also used as a girl name, with the latter form being somewhat more common. Its pronunciation is HHIHL-aa-Riy- †. Hilary is largely used in the English language and its origin is Latin. It is derived from the element 'hilaris' which means cheerful. Hilarius (Latin) and Hilaros (Old Greek) are old forms of Hilary. The Latin root 'hilarus' is the source of the English word 'hilarious'. The name is a medieval form of the Latin name Hilarius; during the medieval period, it has mainly been a masculine name bestowed in honor of the 5th-century theologian Saint Hilarius of Poitiers, France. The saint also gave his name to the 'Hilary Term' of the Law Courts, which fall around the time of his feast day in mid-January. The name was also borne by a 5th-century pope. It saw a revival in the 19th century for both sexes, but by the 20th century, it has become a predominantly masculine name. The name Hillary (English) is the female equivalent of Hilary.

What are the Variant Forms of Hilary?

Hilary is rare as a baby name for boys. At the peak of its usage in 1902, 0.006% of baby boys were given the name Hilary. Its ranking then was #888. The baby name has since experienced a fall in popularity, and is now of very modest use. Out of all boy names in its group, Hilary was nonetheless the most regularly used in 2018. Though Hilary is somewhat used more commonly as a girl name today, there was a period from 1902 to 1931 that it was more popular with boys. From 1949 on, increasingly more girls than boys were named Hilary. 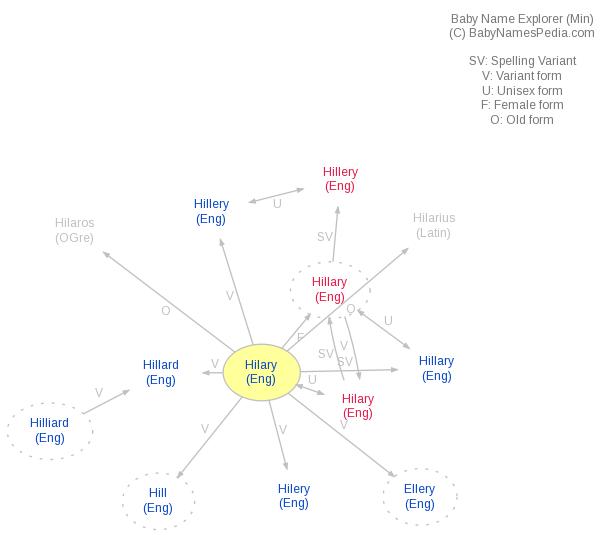