What does Hugo mean?

[ 2 syll. hu-go, hug-o ] The baby boy name Hugo is pronounced HHYUW-Gow in English, HHUY-K-ow in Dutch, or UW-Gow in Spanish †. Hugo is of Germanic origin, and it is used largely in the English, Dutch, French, German, Latin, Latinized, Portuguese, Scandinavian, and Spanish languages. The form developed as a Latinized alternate form of Hugh in the mid-19th century. The surname was borne by the Victor Hugo (1802-1885), the French author who wrote The Hunchback of Notre Dame (1831) and Les Misérables (1862).

Variant forms inherit both the origin and meaning of Hugo. 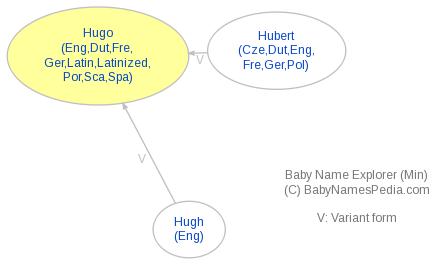