What does Ian mean?

[ 2 syll. ian, ia-n ] The baby boy name Ian is pronounced in English as IY-ahN †. Ian's language of origin is Hebrew, and it is predominantly used in the English, Scottish, and Gaelic languages. This first emerged as an independent given name in 19th-century Scotland. It is now widely used among English speakers without much association with its Scottish roots and its source form John.

Ian is a variation (English, Gaelic, and Scottish) of John (English and Hebrew).

Ian has 15 variations that are used in English and foreign languages. Variations used in English include Iaen, Iaene, Iahn, Iaine, Iane, Iann (used in Scottish too), Iannel, Iayn, Iayne, Iin, Ion, and Ionn. The variant spelling Ean (used in Gaelic, and Manx too) is another English form. Iain (Scottish) is a variation of Ian that is in foreign languages. Another foreign form is the variant spelling Iaian (Scottish).

The origin and meaning of Ian is inherited by all variant forms. 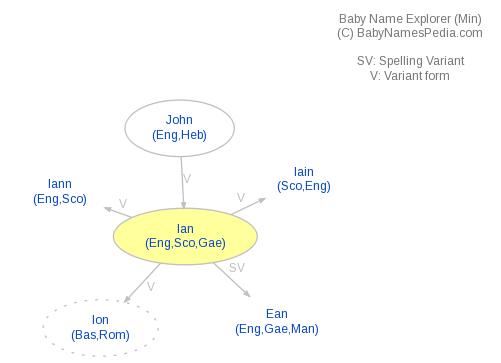