What does Ignatius mean?

[ 3 syll. i-gna-tiu(s), ig-nati-us ] The baby boy name Ignatius is pronounced as ihG-NEY-SHahS in English †. Ignatius is used predominantly in the Dutch and English languages, and its origin is Etrusk. The first name is derived from the Roman family name Ignatius (Latin) or Egnatius (Latin), which is possibly of Etruscan origin; it was later linked to the Latin 'ignis'. The name was borne by various early saints, including Saint Ignatius of Antioch (35-110), a student of the apostle John. It has been widely used among Roman Catholics since the 16th century, often in honor of the Saint Ignatius Loyola (1491-1556), the Spanish founder of the Jesuits or the Society of Jesus. The name is used in Ireland as the Anglicized form of the Gaelic Eighneachán. The name Ignatia (German) is the female version of Ignatius.

Ignatius is a widely used name; it has 47 variants that are used in English and other languages. Variants used in English include Egnatius, Iggi, Ignac, Ignace (also used in French), Ignacea, Ignacee, Ignacey, Ignaci, Ignacie, Ignacio (also used in Italian and Spanish), Ignado, Ignas, Ignatas, Ignatia, Ignatious, Ignatus, Ignatz (also used in German), and Inacio. The pet forms Inigo (also used in Basque) and Neci are other English variants.

Both the origin and meaning of Ignatius is inherited by all variant forms.

Ignatius is uncommon as a baby name for boys. At the modest height of its usage in 1906, 0.013% of baby boys were given the name Ignatius. Its ranking then was #553. The baby name has since fallen out of favor, and is currently of very light use. Within the group of boy names directly linked to Ignatius, Ignacio was the most widely used in 2018. 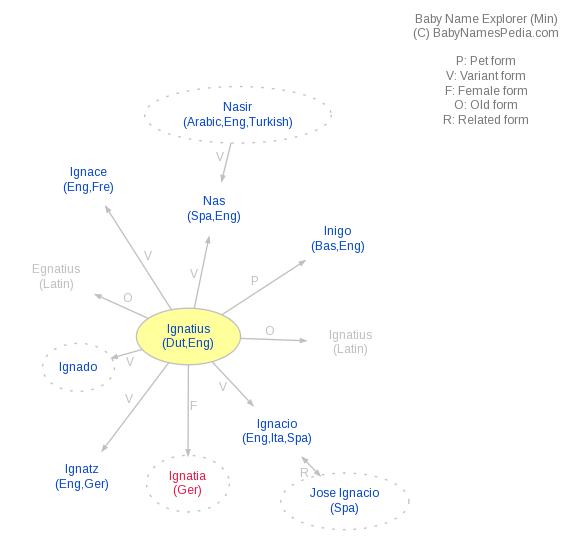