[ 4 syll. i-ka-roa, ik-ar-oa ] The baby girl name Ikaroa is also used as a boy name. It is pronounced iy-Kaa-ROWaa- †. Ikaroa is of Maori origin. The name literally means 'long fish' in reference to the long part of the North Island, which was called by the ancient Maori 'te ikaroa a Maui' meaning 'the long fish of Maui'. In Maori mythology, Ikaroa is a long fish and the mother of the Milky Way and all its stars. Ika-Roa is also a Maori name for the Milky Way.

Ikaroa is uncommon as a baby girl name. It is not in the top 1000 names. 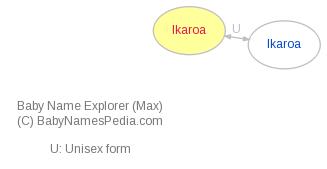