What does Illinois mean?

[ 3 syll. il-li-noi(s), ill-ino-is ] The baby boy name Illinois is also used as a girl name. Its pronunciation is IHLAHNOY †. Illinois is derived from Native American origins. The name's meaning is he who speaks the regular way; from Illinois, USA. The name is ultimately from the Miami-Illinois branch of the Algonquian language, from the verb 'irenwewa', which was modified via the Ojibwe-Ottawa dialect into 'ilinwe', and finally via French influence into the borrowed '-ois' ending.

Illinois is unusual as a baby name for boys. It is not listed in the top 1000 names. 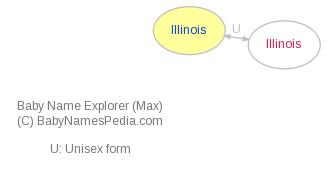