What does Imani mean?

[ 3 syll. i-ma-ni, im-ani ] The baby girl name Imani is also used as a boy name, though it is far more popular for girls. It is pronounced iy-MAA-Niy- †. Imani has its origins in the Arabic and African-Swahili languages. It is used largely in Swahili and English. African-Swahili origin, English and Swahili use: It is derived literally from the word imani which is of the meaning 'belief, faith'.

In addition, Imani is a form (Swahili) of the Arabic Iman.

Imani is rather popular as a baby girl name. The name increased in popularity from the 1980s up to the 1990s; prior to that, it was of only very light use. At the modest peak of its usage in 1998, 0.063% of baby girls were named Imani. It was #253 in rank then. The baby name has experienced a drop in frequency since then. In 2018, it ranked at #515 with a usage of 0.033%, but it was nevertheless the most popular out of all girl names in its family. Imani was used 64% more than the next ranked name, Amani, in 2018. Imani has primarily been a baby girl name in the last century. 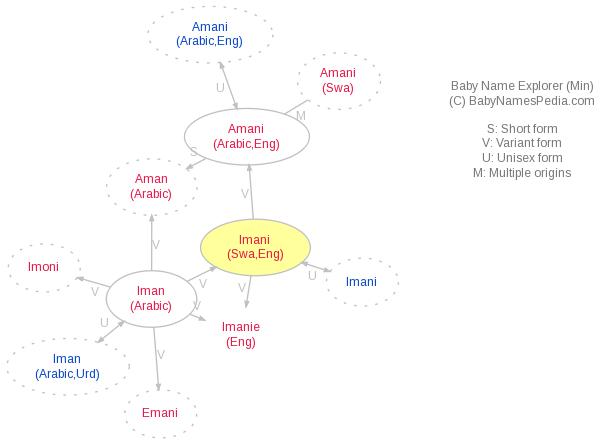