What does Imelda mean?

[ 3 syll. i-mel-da, im-e-lda ] The baby girl name Imelda is pronounced as IY-MehLD-ah †. Imelda is used predominantly in English, Italian, and Spanish. It is derived from Germanic origins. The meaning of Imelda is universal battle. It is derived from the words 'ermen' which means whole, immense, universal ; 'hild' battle, fight. The name was first popularized among Roman Catholics by The Blessed Imelda Lambertini, a young 14th-century nun and saint from Bologna. The baby name was later adopted by English speakers in the 20th century, especially in Ireland.

Imelda is a variation (English, Italian, and Spanish) of the name Irmhild (German).

Melda (familiar form in English) is another variant of the name.

Imelda is unusual as a baby girl name. Its usage peaked modestly in 1978 with 0.009% of baby girls being named Imelda. It was #947 in rank then. The baby name has experienced a loss in popularity since then, and is currently of irregular use. Among all girl names in its family, Imelda was nevertheless the most widely used in 2018.

Baby names that sound like Imelda include the name Emelda (English and French) and the name Imelde (Italian). 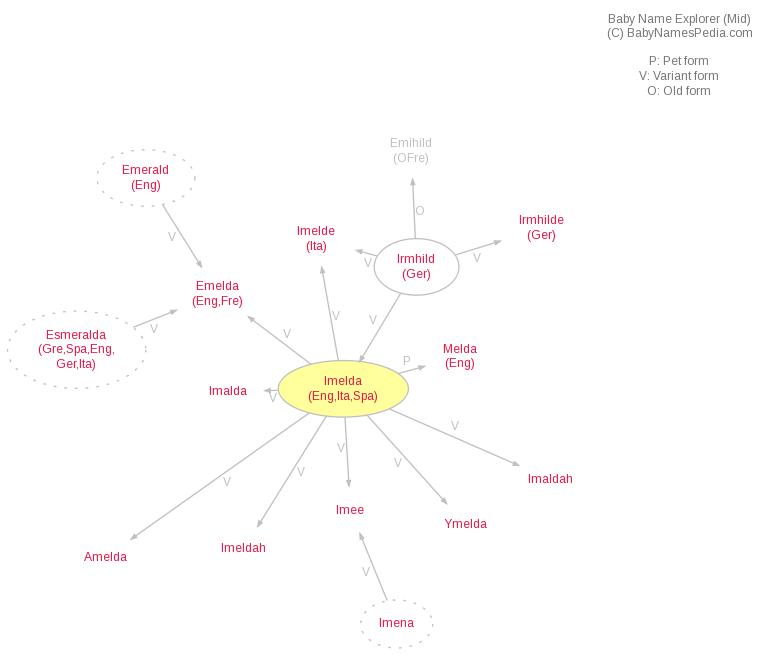