What does India mean?

[ 3 syll. in-dia, ind-ia ] The baby girl name India is pronounced as AHNDiy-aa- or IHNDYaa- †. India's origin and use are both in the English language. Its meaning is literally from the vocabulary word 'India'. The first name is from the name of the country, which is itself derived from the name of the Indus River. The first name was adopted by English speakers from the late 19th century, at the time when India was a prominent colony of the British Empire. For instance, India Hicks (1967-), the celebrated interior designer and daughter of Lord Mountbatten, was given the name out of the family's fascination and ties with India. The popularity of the name was further boosted by its appearance in the Margaret Mitchell novel Gone with the Wind (1936) and the subsequent film.

India is a classic favorite. Today it is still somewhat popular as a baby name for girls, though it was in more widespread use before. At the modest peak of its usage in 2001, 0.053% of baby girls were given the name India. Its ranking then was #297. The baby name has since dropped out of favor, and is in recent years of irregular use. In 2018, its usage was only 0.016% and its ranking #910, but it was nonetheless the most commonly used out of all girl names in its group. 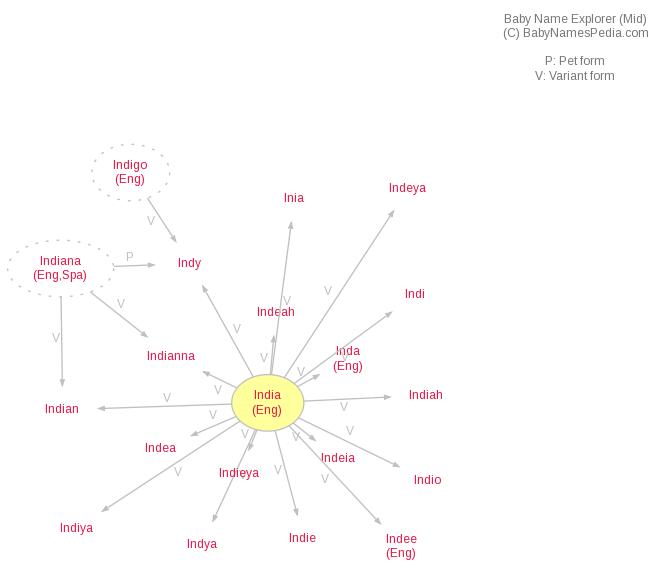