What does Ingrid mean?

[ 2 syll. in-grid, ing-r-id ] The baby girl name Ingrid is pronounced as IHNG-GRihT (German) †. Ingrid is used mostly in English, German, and Scandinavian, and its language of origin is Old Norse. The first element Ing refers to a Germanic god of fertility, who was also known as Ingui or Yngvi. The second element could be 'fridr' (meaning peace, beautiful, fair) or 'rida'; in the latter case, the name is usually taken to mean 'Ing's ride'. The name was first used in the 13th century, but English speakers took it up only from the mid 19th century. In the 20th century, the name became popular with English speakers through the fame of the Swedish film actress Ingrid Bergman (1915-1982).

Ingrid has 17 derivatives that are used in English and other languages. English derivatives include Ingaberg, Ingrad, Ingre, Ingred, Ingrede, Ingria, Ingrit, Ingrith, and Inkeri. Other English variants include the shortening Inga (used in German, Polish, Russian, and Scandinavian as well), and the pet form Inneke.

Ingrid is a classic favorite. Today it is still somewhat popular as a baby name for girls, though to a lesser extent than it was before. The name grew in popularity from the 1930s up to the 1960s. At the modest peak of its usage in 1967, 0.033% of baby girls were named Ingrid. Its ranking then was #383. The baby name has since dropped in popularity. In 2018, its usage was 0.014% and its ranking #988, but it was nevertheless the most popular out of all girl names in its group. 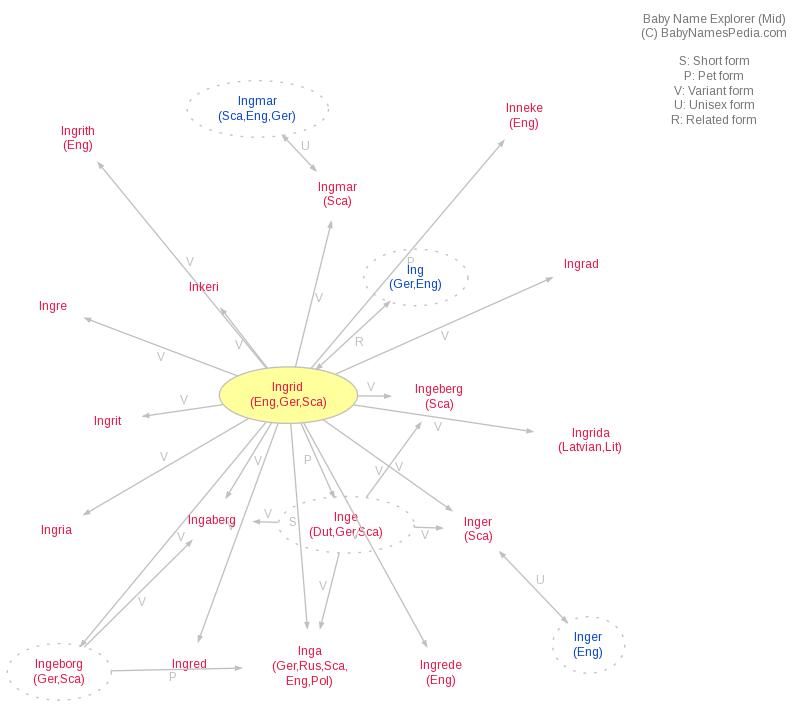